An 18-year-old, with a fresh social security number and an appetite for education, may seem like a potential cash cow for a student loan lender.

It’s safe to say the student would be as excited about the arrangement.

To a young person on the verge of heading to college, the last thing on their mind is thinking critically about their financial future. At the same time, there is an ever-increasing line of folks lining up to make as high of a profit margin off of each student as they can. Between ‘perk packages’ from your school, ‘jaw-dropping’ rate offers from private lenders and all those ‘vital’ subscription services that will help your student handle adulting, there are more ways than ever for others to profit off of college students.

Which makes it THAT much more important for students to understand borrowing strategies, and the elements that go into putting together a plan to cover the cost of college.

There are a lot of ways to pay for school, including a number of ways to utilize financing via loans. That’s why having a strategy for financing your higher ed journey is so crucial–there are so many options for financing and repayment. It is so much more than just planning on how much you need to take out.

The first step is deciding which type of loan to take out. You can choose between federal and private, and some students may even qualify for subsidized federal loans to help offset interest payments. Even if you are a graduate student, there are still options for federal loans with low, fixed interest rates.

“I wanted to research all of my options and make sure I gave myself the best path toward repayment,” said Logann Epley, a recent secondary education graduate. “I even wound up being able to cancel one of my loans due to my job placement… Having a plan was extremely important for me.”

As part of her borrowing strategy, Epley took out a Perkins Loan through her school, and after switching from journalism to education, she found herself in a position to repay her loan through teaching. Since Epley will be working at a low-income school, she is eligible to cancel 100 percent of her loan payments for up to five years.

Cancel, as in they go away and you never have to pay them.

Students can also cancel Perkins loans for working with special education, serving in the Peace Corps and more. And that’s just one of the federal loans available.

Having a plan for borrowing can also be key for students seeking advanced degrees.

Luke Alexander knew he was “on his own” for his MBA/law degree, while Vincent Pena was able to snag a graduate assistantship to help cover the cost of tuition and provide a monthly stipend. Both had different monetary mountains to climb to get their graduate degrees. Both needed to take out loans to get there.

Alexander’s loans wound up rising into the six-figure range, as he took out the max loan he could each year to work toward his double degree. It was a risk, he’d be the first to admit that, but it’s one he knew could pay off with a lucrative career. He took a careful look at the interest rates, knew what it could mean for career potential, and took the leap toward upward mobility in the business world.

Read more: How to Get the Most out of an MBA

Pena’s path was different, but still involved loans. He had all of his tuition and healthcare coverage provided through an assistantship, and also received a monthly stipend to help offset living costs. But he still had to get to Nebraska from Arizona, cover the cost of moving, and handle some student fees that were not paid for by his position.

Read more: Making a Grad Degree Work For You

It wasn’t a huge sum of money in comparison to students like Alexander, but Pena had a plan, and used it to get his master’s degree in two years, then stuck around an extra summer to get more hours as a TA before graduating in August. At that time, Pena had also secured a pair of part-time gigs while he started to research the potential of further education. 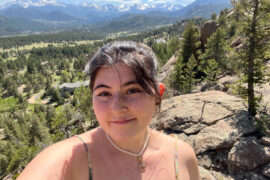