Home / Blog / Colleges / I Want to Work in Tech Engineering. Should I get a Computer Science Degree or go to a Coding Bootcamp?

In this current digital world, jobs in tech continue to be in demand. Keeping in mind that the average employment growth rate is seven percent, the U.S. Bureau of Labor Statistics reports a growth rate for Software Developers at 24 percent, 15 percent for Web Developers, and 19 percent for Computer and Information Research Scientists. The list of jobs that require a tech engineering background continues to outpace average job growth, and highly competitive salaries entice many.

While university computer science classrooms fill and programs expand, there simply aren’t enough graduating CS students to fill tech needs. Back in 2012, Dev Bootcamp attempted to find a solution by immersing students in the first coding bootcamps of its kind. Since then, the market has expanded to include 108 bootcamp providers. Coding bootcamps as a whole are expected to churn out 20,000 graduates in 2018, comprising a substantial chunk of the market, as universities computer science graduates totaled 64,405 in 2016 according to the National Center for Education Statistics.

With all this bootcamp hype, when is it your best bet to enroll in one of these programs, and when is a computer science degree a better idea? This all comes down to age, previous education, experience, and desired career. This article will unpack these two educational paths to help you understand the differences and decide which is best for you.

First off, here’s a basic compare and contrast: 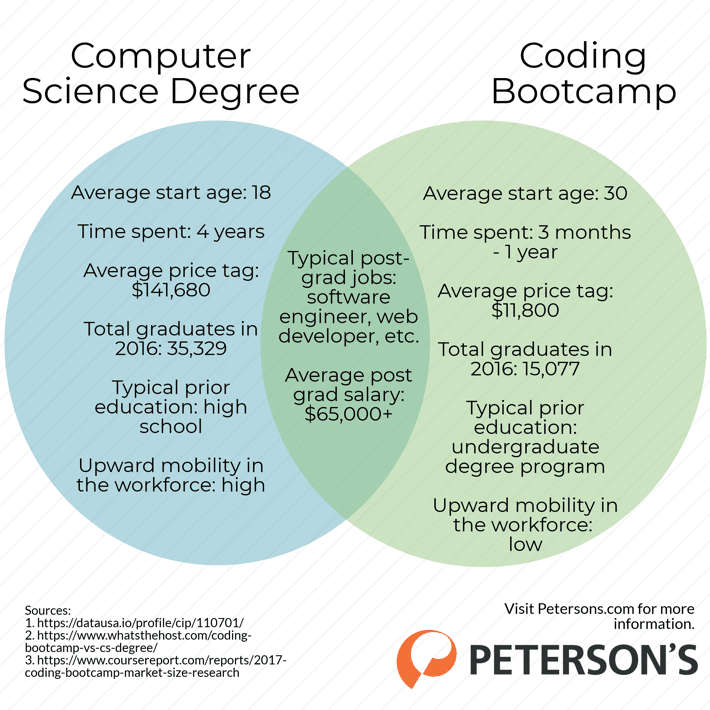 These are the major differences. So, what are those underlying differences that determine who takes advantage of a bootcamp, and who gets a full computer science degree?

What’s important to remember–and what makes the numbers make sense–is that most bootcampers have prior college education and are getting the certification to make a career change, while most computer science undergrads are getting their degrees right out of high school and starting their career thereafter.

“We see people changing careers so quickly and so frequently these days compared to decades past so there’s just a huge need for that,” said Drake, “in my opinion, that’s the need that bootcamps are filling not so much a replacement for undergrad.”

Then, there’s the speed difference, which comes with its pros and cons, as well as differing opinions of quality.

“One of the benefits of an intensive program like a coding bootcamp is you can move very, very fast if you’re dedicated to it and if you put in the time and its astonishing what you can accomplish in a short period [of time],” said Drake.

As with most education, you have to be diligent about your studies in order to be successful, and the most diligent students are often the fastest learners. However, while some would hail the dedication of intensive bootcamp students or remote students who learn while holding down a full-time job, some claim that the fast-paced nature of these bootcamps is just not enough in order to understand computer science holistically.

“A coding bootcamp is too narrow of an education; it teaches skills on the most recent technologies without providing relevant background to be able to take those skills to the newest frameworks and languages as they emerge,” said Kenneth Anderson, professor of computer science at the University of Colorado, Boulder.

While knowledge breadth in a bootcamp is much more narrow, a bootcamp is still a useful education. Richard Watson, Associate Professor of Computer Science at Texas Tech University, compared a bootcamp to “an apprentice-type trade school for that low-end trade side of computer science.”

To understand the difference in job potential, Watson, used a physical building analogy. He compared computer science graduates to architects and bootcampers to the builders of the structure.

“A bootcamp would probably be a watered down version of a computer programming degree, not a computer science degree,” said Watson, who said that hiring someone with a computer science degree is “hiring someone who can be the architect of a program you’re trying to write, while someone you hire from a bootcamp, might be somebody who could implement that blueprint. But, they can’t come up with the blueprint themselves necessarily, because they’re going to be missing a lot of the theory.”

When you think about the type of person who enrolls in a coding bootcamp versus one who enrolls in a university computer science degree program, a key difference is simply that they are on different paths to achieve a similar goal.

These different paths may mean that while both the CS student and the bootcamper will go into some sort of computer programming or development field upon graduation, they have acquired different skills that will apply to a specific job.

A computer science student has acquired both a wider breadth of knowledge on topics that they may or may not use in their later career, as well as a deeper understanding of concepts.

“My degree gave me a great foundation for anything I might do in my career in the future. It didn’t focus on any specific topic but it rather covered a large breadth of topics that gave me the tools to be confident in learning anything new or more advanced in computing,” said Alex Moller, software engineer and BS in Computer Science.

Similarly, Gain Haganeau, also a software engineer with a BS in Computer Science, felt the knowledge he acquired in undergrad built a platform for any path he may choose in the future.

Computer science majors have a much wider array of computer engineering background and knowledge than bootcampers. However, bootcampers often have a wider array of communication and workplace knowledge and experience. This is due to the fact that a bootcamper will typically have an undergraduate degree in a different field. Then, they have several years of experience working in a different field. Drake said he sees many bootcampers with humanities degrees that have five to seven years of on-the-job experience. This makes for a very different background than your typical programmer, but one with general employment skills that are still relevant any job.

“These are people who don’t run into the same stereotypical social skills problems that you hear about in computer science programs,” said Drake, “they know how to manage their time, how to deal with an overflowing inbox, they understand how to communicate with colleagues well.”

For example, Michaela Miller, Office Manager here at Peterson’s, is enrolled in a coding bootcamp. She hopes to eventually work in software development, but has a diverse education and design background.

“I got interested in coding because it combines so many of my interests – problem solving, creative thinking, and tech. It’s a good way to get into the field without getting a new degree,” said Miller.

While the bootcamp is helping Miller transfer into a different arena, she warns that you must be dedicated and stay motivated in the program as it is a huge time commitment, especially if coupled with a full-time job. You must also take formatting into account.

“The learning style is tough because it’s all written. I learn better visually through videos so its an adjustment. But, the curriculum is solid and I couldn’t learn coding without it,” said Miller.

While it is true that CS majors and bootcampers are after the same field, the job options between the two vary somewhat. Yes, both offer a path to software engineering or programming, website development, and other in-demand jobs that require coding and development skills as a first job. However, more specific jobs may favor one over another. It makes sense that a company who needs someone to do very innovative IT design work, requiring extensive programming and theoretical computer science knowledge, would hire someone with a computer science degree.

“Some people who are computer scientists aren’t actually involved in coding, they may actually be coming up with the design of the code and then pass on that knowledge to these people who came out of a bootcamp to actually implement their ideas,” said Watson.

To this point, bootcamps don’t have time to teach algorithms in-depth, while university programs do. This goes back to Watson’s architect analogy. Watson explained that many problems to solve in the field of computer science reduce to problems that have already been solved in the form of algorithms.

“If you’ve gone through a bootcamp and you haven’t spent the amount of time that we spend covering algorithms, you might not even know that a good algorithm to solve a problem already exists. You’re going to try to reinvent the wheel,” said Watson.

Watson explained through this reinvention process, a programmer will likely come up with something very basic, when a more advanced, more efficient version already exists. This lends a hand to the advantage computer science majors have once they are immersed in the field.

On the other hand, a position that combines coding and programming with another field may make a bootcamper more suitable for certain jobs. This may include jobs like quantitative marketing or product management.

“It’s very common to see technical people transition into product management after gaining a lot of experience,” said Drake, who believes “bootcamps are today–and I expect will be even more tomorrow–opening up options that computer science paths don’t have [for students] when they leave college.”

While the two vehicles to computer science and programming follow different paths and opinions of comparison on the two vary, both are relevant in today’s tech world. As the physical building requires both an architect and builders, as is the world of tech.

“You need both levels,” said Watson. He explained that bootcampers are necessary “even if [they] can’t do the whole design, as long as the company has somebody who can.”

So, what’s your path? If you’re set on a career in computer science, take the leap either way. If you’re at the college entering age, get the degree, as a bootcamp isn’t a replacement for an undergraduate degree. And, if you’re set on making a complete career switch later in life, an in-depth computer science education will give you a solid foundation and allow you to progress in the industry. Of course though, you’ll have to take into account the fact that this is much more of a financial and time commitment.

However, if you’re in a completely unrelated job and want to make the switch, but aren’t willing to commit to a second round of undergrad, a bootcamp is probably your best choice. Whether you’re able to take on the task full-time or work alongside your coding education, bootcamps offer flexible options. A bootcamp may also be your move if you’re working at a tech company you want to stay in, but want to cross over from say, the sales department or HR, to the more tech-based side of things. In this case, your company may even sponsor you to enroll in a bootcamp.

“It’s not about replacing [an undergraduate degree], its about supplementing it,” said Drake.