Given the COVID-19 epidemic, Peterson's is more committed than ever to providing 24/7 uninterrupted access to all your prep resources. Read more about the latest news, rescheduled standardized tests, testing center closures, and how we can help, here: Peterson's response to COVID-19.

So why does it keep coming up? What do you need to know to be safe, really? How worried should you be?

Well, that depends. How do you use Facebook and Twitter and Google+? Do you use them knowing full well that they’re public and that anything you say or put up on those accounts is going to be accessible to the rest of the world? Do you consider that your grandmother might read your updates and peruse your photos? Do you take steps to use privacy controls to hide anything you wouldn’t want seen?

To put it bluntly, do you use social media the way you would talk?

It’s very, very easy to get into a mode of thought when you’re using social media that ignores the idea of a specific audience. When you say something out loud, you can’t get away from the fact that everybody around you will hear every word you say. But when you say something online, there’s a level of detachment that can make it easier to forget who all is listening. The solution is to treat social media the same way you would treat any kind of communication. You wouldn’t say things in a public place that you aren’t comfortable with random strangers, or friends, or family members hearing. You wouldn’t paste a picture of yourself doing something…incriminating…on the bulletin board at the local Starbucks where anyone could see it. So don’t do it online.

I’d like to think I’m preaching to the choir, and that those of us who’ve grown up with social media are well-versed in its use and its operations. We know that anything we put up on those forums is public, and we adjust our speech appropriately. But just in case, let me put it one final way: Imagine that President Barack Obama is looking for the high-school student, the one student in all the land, that he’s going to name as leader of his new giant robot task force. (Roll with me on this.) And you have just the right combination of qualities he’s looking for! But he’s going to take a look at your Facebook page first. Would be okay with President Barack Obama seeing what’s on your Facebook page? Would you be okay with President Barack Obama reading your Twitter posts? If the answer’s no, then the same is true for a college admissions officer.

Tone down what you would say. Keep those photos private. Use privacy settings to help restrict what is publicly viewable. Keep your social presence clean, the same way you would your resume or your transcript.

After all, you never know when President Barack Obama might be looking for the leader for Cyber America Squad 7. 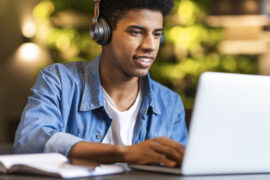